Estes Park Singing Cowboy Ron Ball has been performing for over 66 years with traditional Cowboy music of the singing cowboys of the silver screen and current singing Cowboys as well as songs that came up the trail with the herds back in the 1800’s.  Ron’s singing career began at the young age of 13 while working cattle, horses and riding in rodeos on ranches in Wyoming and Colorado. He continued performing over the years at many venues while making a living as a Marine and a Los Angeles Police Officer. 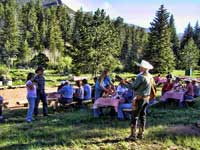 After retiring from the LAPD and moving back to his beloved mountains in Colorado in the mid 80’s, he went back to his roots and started again performing at local and area ranches on a weekly basis, such as Longs Peak Inn, Wind River Ranch, Aspen Lodge, Indian Head Ranch, Glacier Lodge, MacGregor Ranch, The YMCA of The Rockies Livery, Sylvan Dale Ranch (in Loveland), Lazy H Ranch and now Pathways Ranch (in Allenspark), and many other locations, and continues at some of these locations, but unfortunately over time some of these ranches either closed or sold to private organizations.

He pays tribute to the King of The Cowboys, Roy Rogers and his family, as Ron has been friends with the Rogers family since the early 1960’s.  He has also performed with Roy Rogers, Jr. (Dusty) in Branson with him and his band The High Riders.  Ron is also a Western artist and did two portraits of Roy Rogers and Trigger back in the 1980’s, which hung in the Roy Rogers and Dale Evans museum both in Victorville, California and in Branson, Missouri until the closure of the museum in Branson in 2010.  Ron was presented with one of the portraits back from Dusty after the museum closed as a gift for Ron’s friendship with the family over the years.

Ron dresses as Roy, with his custom made “Roy Rogers” double horseshoe white hat, Roy’s custom American Double–Eagle boots and many of the custom made shirts worn by Roy, as well as spurs and a pair of engraved nickel-plated single-action Colt 45’s. He also tells of the history about the Rogers family, about their movies, the songs, family and their life in the spotlight of the Western genre of the 30’s, 40’s, 50’s and 60’s.  He also did a tribute to Roy at The National Western Stock Show’s Wild West Show for Roy’s 100th birthday in 2012.

Ron has over the years performed with many groups, such as with members of The Sons of The Pioneers, The Reinsmen, several of the Chuckwagon Association groups over the West, including The Lazy B Chuckwagon, The Lazy H Chuckwagon in Golden, and when he was an original member of The Western Music Association at their annual event in Tucson.  He also served as the Master of Ceremonies for many of their events.  He has performed at many Cowboy Poetry Gatherings over the West for many years as well-with such noted performers as Don Edwards, Michael Martin Murphy, Rex Allen, Jr. and many more. 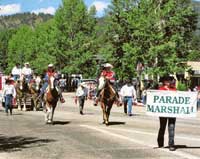 Ron has sung “The National Anthem” for many years at our local Rooftop Rodeo and in 2010, 2011 and 2012 at The National Western Stock Show and Rodeo in Denver, at The Greeley Stampede, and at Cheyenne Frontier Days (with requests from all of them to come back in 2013).  “The National Anthem” has much meaning for Ron, since he is a Veteran Marine and a retired Los Angeles Police Detective Sergeant.  He was personally invited by Mr. Marv Witt, Vice President of The National Western Stock Show and Rodeo in September 2010 to do all of the vocals at “The Wild West Show” held during The National Western and continues to be their only singer through 2012.  Ron performed 7 songs during 2 sold out performances, the first year and performed 11 songs in 2012 (also sold out) at these shows.  He was also invited to sing for the newly crowned Miss Rodeo Colorado coronation at the stock show and rodeo.  Also during the stock show run, he as well performed “The National Anthem” 5 different times during various shows, rodeos and other scheduled performances and was featured with Jerry Wayne Olson and his horses at a personal performance for children and handicapped children at a special “Wild West Preview Show”.  Mr. Witt also asked Ron back for next years’ Stock Show and told him that “he is not just a visitor, he is a part of The National Western family”. 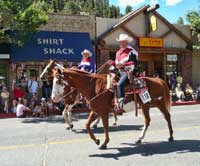 Ron has received many awards over the years including Denver’s Channel 7 Everyday Hero Award, and a special award from the Mayor and Town Trustees of Estes Park after the National Western in January 2011 for all his contributions and “keeping our Western Heritage alive through his music and his art, and express profound appreciation for his generosity and service to our community”.

Ron gives much of his time to the community teaching the Cowboy way of life at places such as MacGregor Kids Camp, Cheley Camp, schools, senior centers, rest homes, assisted living and personal homes where he volunteers his time for those unable to get out.  Ron was also extremely honored to be the 2010 Rooftop Rodeo Parade Marshal.  He also performs the songs of the crooners of the 40’s, 50’s and 60’s and has had the pleasure to perform several times-Nelson Riddle/Frank Sinatra and other crooners of the era with the Estes Park Jazz Big Band at Performance Park.

Ron also is honored to perform at Performance Park every year for the kick-off to the Estes Park Rooftop Rodeo week as well as a second performance of his cowboy music in August of each year.  He has been asked many times to perform at the Rooftop Rodeo Queens Luncheon and their fundraising events, as well as at some of the pre-shows before each rodeo held in July each year.  He has sung in the Rooftop Rodeo Parade and each November he is featured on the Town of Estes Park float for the “Catch The Glow Christmas Parade” the Friday after Thanksgiving, singing traditional Christmas songs.  One of his biggest rewards was to “Make A Wish” for a young boy who wanted to meet a real cowboy-when Ron spent a day with him making his dream come true.  He has also travelled to many schools asking for his services from New Mexico to Washington teaching kids the history of the West.

Ron has sang for many special occasion events, such as weddings, wedding rehearsals, birthday parties, baby showers, family reunions, anniversaries and funerals.  His range of singing includes traditional standards such as Happy Birthday, to lullaby’s, to romantic songs such as Can’t Help Falling In Love, and I Love You For Sentimental Reasons, to anniversaries, such as Happy Anniversary, to many wedding songs such as The Hawaiian Wedding Song, to children’s birthdays allowing the children to participate in the songs, to many songs appropriate for a funeral of any kind.  He had a special request from Mr. W. D. Farr of Greeley while he was in hospice to perform at his memorial service a specific Roy Rogers song that he had asked many national performers if they knew.  Well Ron not only knew the song, but performed it at the Union Colony Civic Center (which was built by Mr. Farr) in front of thousands of Colorado dignitaries, including senators, mayors, etc. Mr. Farr was a pioneer who developed many water sources, cattle and banking operations in Colorado. 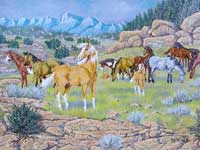 Another area that interests Ron is writing, he has written many songs which have been recorded, including a song requested by The National Western for their 2012 Wild West Show, one song especially for the area he calls home our beloved Rocky Mountains, 2 songs for one of his mentors, Will James who was an author, artist and cowboy (who illustrated books for Enos Mills-the founder of Rocky Mountain National Park), and performed these songs at several prestigious locations, such as The Autry Western Heritage Museum in California, at The Cowboy Hall of Fame Museum in Oklahoma City, and other big venues.

After he and his wife Janie renewed their wedding vows (a gift from their children) in Hawaii’, they attended a luau where he was asked to perform traditional Hawaiian songs with the band, at the ”Best Luau in Hawaii” (voted on by tourists) at 2 of their shows along with a river boat cruise up the Wailua River on the island of Kauai’.  Besides performing at many events across the west, he is also honored to be performing at The Mandalay Bay Resort in Las Vegas in April of 2012. He currently has 9 CD’s available.  (He has also written 2 novels and illustrated 2 Cowboy books for other authors.) 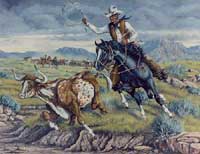 Ron being a western artist is also thorough, not only with his subject matter, but in all aspects of authenticity of any piece that he does.  He was asked many years ago to do 2 drawings of the original MacGregor homestead property.  With many months of research he did 3 preliminary sketches and presented them to the trustees of the ranch (which is a historical landmark-in Estes Park), for which they chose 2 for him to finish into 2 large drawings which hang in the office at the ranch.  He has 6 original prints that he sells as well as doing commissioned paintings for individual clients.  Since his time is limited he no longer uses a gallery to sell his works of art, as he prefers doing commissions instead. 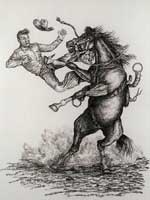 He currently has several regular weekly performances (mostly in the summer tourist season) at The YMCA Livery weekly hayrides, where he performs at a campfire setting, as well as other locations in the Estes Park and Allenspark area.  His performances at Performance Park are free to the public.

Ron has always been able to adapt any performance, art work or whatever challenge that is given to him in a kind, soft spoken, gentle manner that continues to show his kindness toward his many devoted family members, friends and fans.

For information regarding any of his events, fees, time commitments, feel free to contact Janie or Ron at: 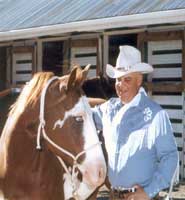 For your convenience, the Jackson Stables Website is optimized for the iPad and other mobile devices.